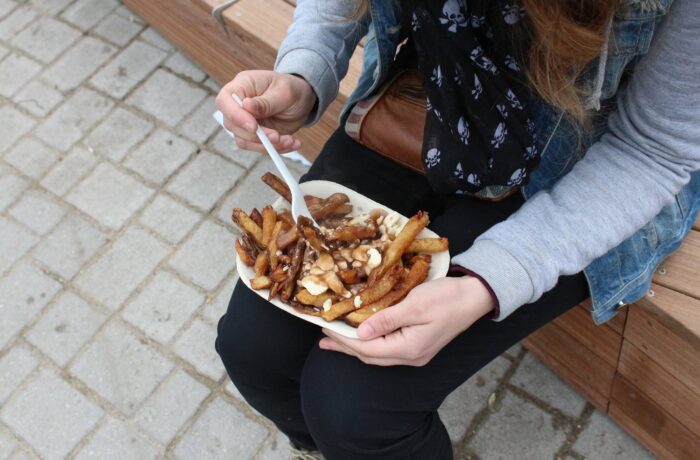 Eating your way through Canada

There’s no shortage of new and interesting foods to try in Canada. Province to province and coast to coast, you’re bound to eat something you’ve never even heard of before. But with so many foods to try, where do you start? And what in the world are “jiggs dinner,” “poutine,” and “hodge podge?” This guide will take you on a food tour around Canada and show you what to look out for in each province and territory.

If you’re craving something sweet, Ontario has some great options for you. Beaver tails are very popular, especially in the eastern parts of the province. And don’t worry, no actual beavers were harmed in the making of this delicious dessert. It’s a flat, deep-fried dough pastry that’s typically covered in cinnamon and sugar, but you can have beaver tails with all sorts of different toppings as well. Another fan favourite is butter tarts. A pastry filled with buttery, sugary goodness, and sometimes raisins or nuts. What’s not to like?

Poutine (pronounced POOH-TEEN or POOH-TIN) is a Canadian classic and is said to have been invented in Quebec. The dish is made with fries, hot gravy, and cheese curds— though there are many variations and toppings that you can add on. And if you’re still hungry after a container of poutine, maple taffy is a go-to dessert. Typically served in the winter during festivals and events, maple syrup is poured onto a bed of snow and rolled up onto a stick. It’s sweet, it’s sticky, and it’s delicious. 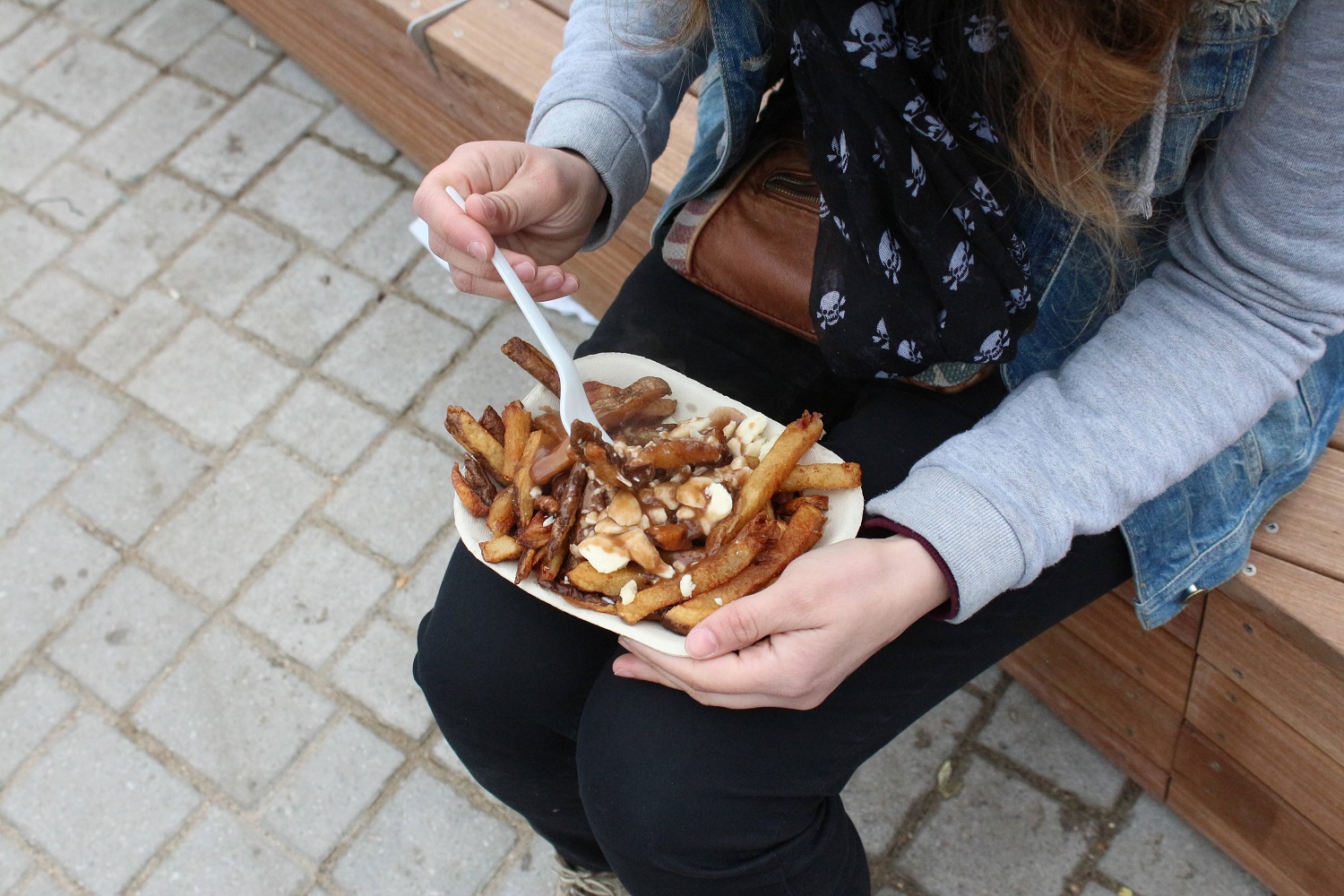 Alberta’s beef is world-renowned and considered some of the best. This prairie province is perfect for raising cattle with its rolling fields and huge grasslands. If you want to try something a little more adventurous, Alberta is also known for its bison. The largest mammal in North America is a big part of Alberta’s cuisine and comes in many different forms, such as burgers, steaks, and sausages. Looking for a vegetarian option? Green onion cakes are the unofficial dish of Edmonton. Brought to the province’s capital by Chinese immigrant Siu To, the crumbly pancake packed with green onions is wildly popular.

Guess which was named first: the capital city, Saskatoon, or the saskatoon berry. If you guessed the berries, you’d be right. These sweet, juicy berries were named by the Cree Nation, and the name was later used for the capital of Saskatchewan. You can eat these berries in a range of ways, from picking and eating them straight from the bush to baking them in pies. 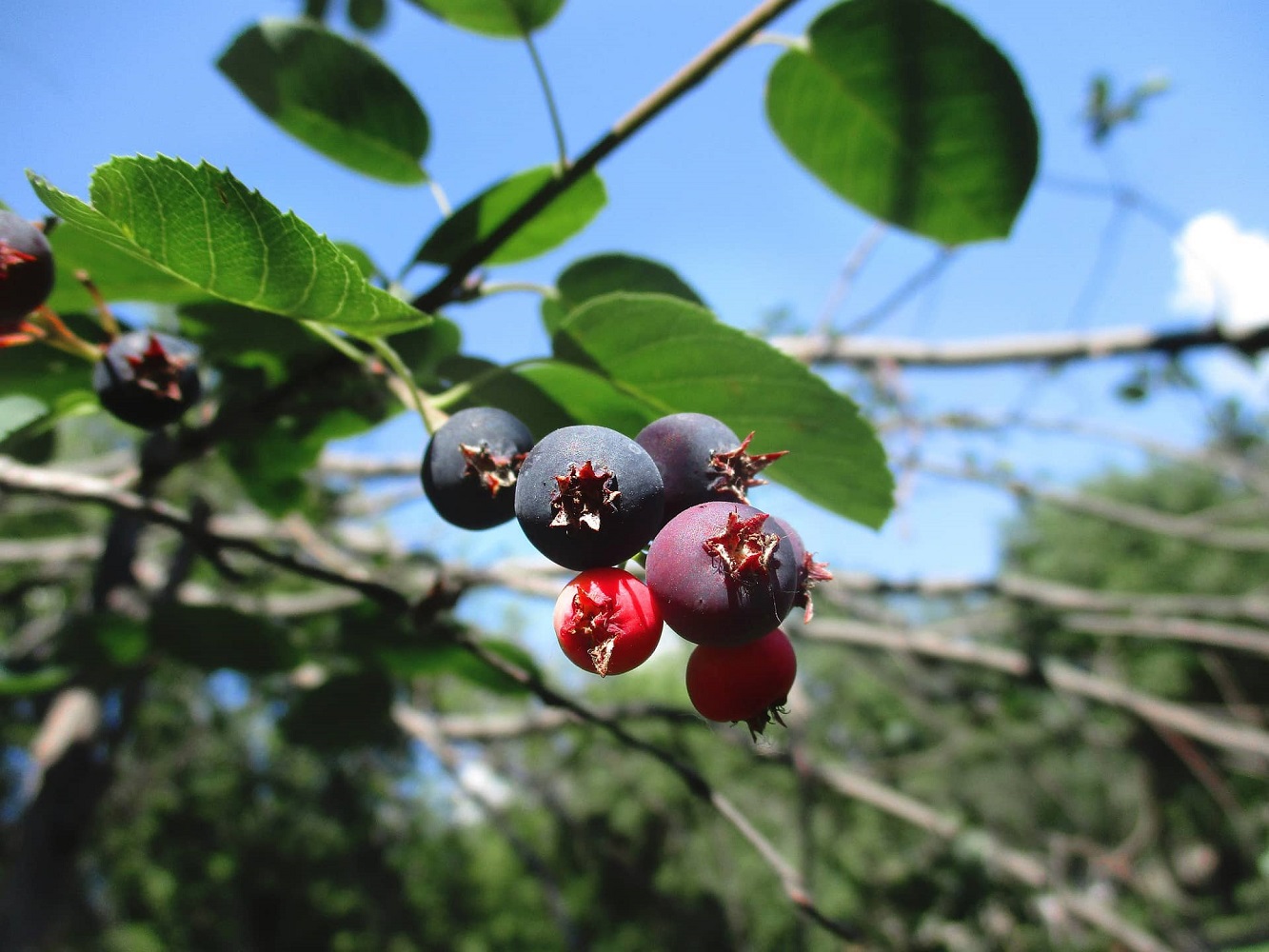 When a Winnipeg restaurant owner accidentally mixed honey, mayonnaise, and dried dill together, he probably didn’t realize he had just created a Manitoban speciality. But that’s exactly what he did. Honey dill sauce is unique to Manitoba, and a must-try if you’re in the province. If you’re looking for something with a milder taste, bannock is right for you. A traditional food in many Indigenous cultures, bannock is a heavy, dense bread that is typically made out of wheat flour.

As a coastal province surrounded by the ocean, it’ll come as no surprise that Prince Edward Island, better known as P.E.I., is known for its seafood. Malpeque oysters have been a source of pride for the islanders since 1900, when these oysters were named best in show at the Exposition Universelle in Paris. Over 100 years later, they are still one of P.E.I.’s best and most popular foods. You’ll also be able to find fresh lobster and mussels on almost all menus in P.E.I., where you know the seafood is as fresh as it gets. 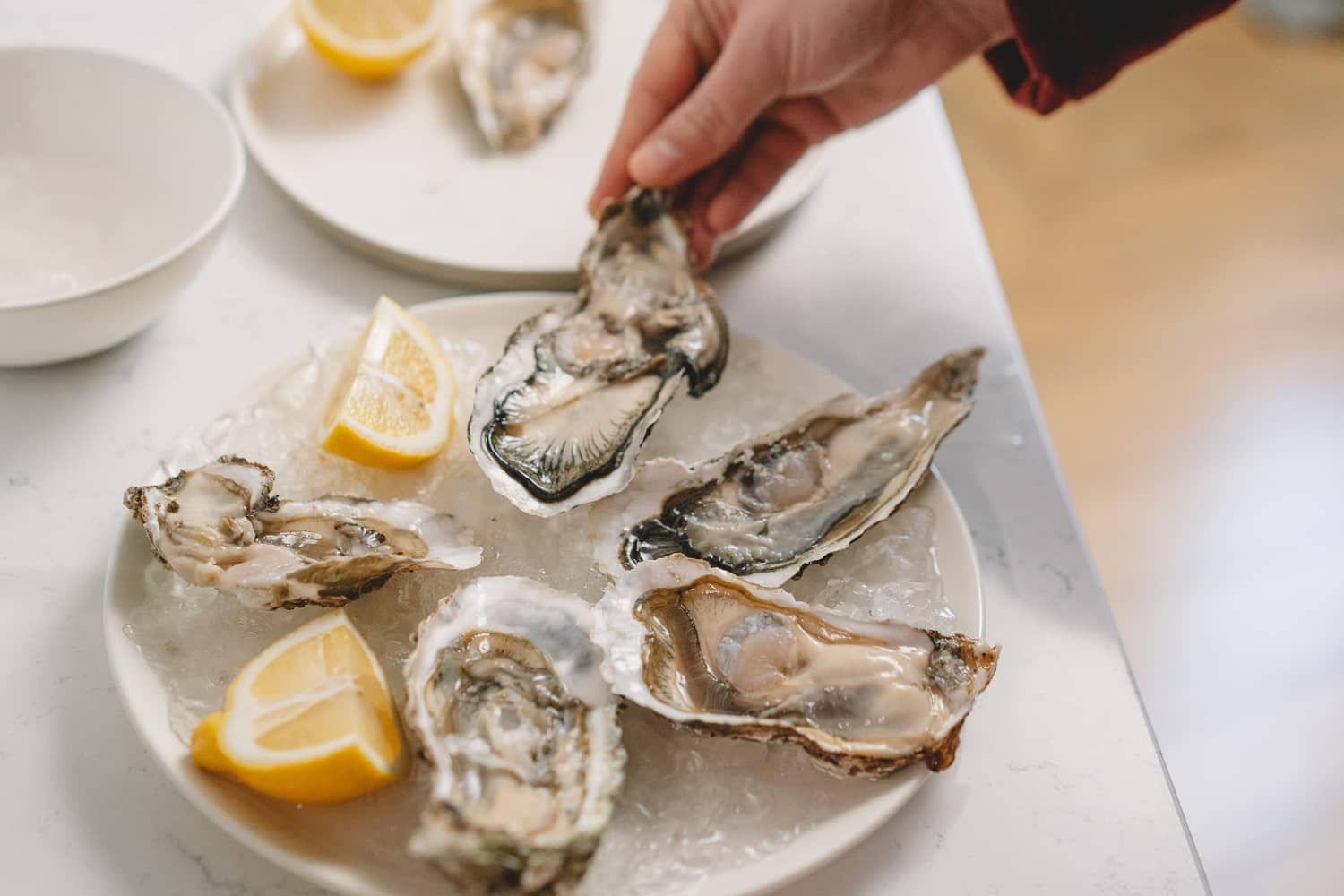 Ployes is a popular dish in the northern region of this province. It’s basically a pancake that only uses the ingredients you’re most likely to have on hand in your pantry, such as flour and baking powder. Didn’t think it could get any easier? This breakfast classic doesn’t even need to be flipped in a pan like a regular pancake, making it a quick and simple meal. Ployes can be served sweet or savoury, but traditionally it’s eaten with sticky sweet maple syrup.

You can’t go to Canada’s ocean playground and not try some more seafood. Like P.E.I., Nova Scotia is known for its lobster, and is a must-try in this province. Getting tired of all this seafood talk? This province is also the creator of hodge podge, a dish that celebrates the vegetable harvest in the fall. It’s a stew that’s typically made with beans, carrots, potatoes, and any other vegetables you have on hand. It’s topped with cream and butter, making it a rich, perfect comfort dish on a crisp fall day. And of course, Nova Scotia has the best wild blueberries of any province in Canada, so make sure you snack on those during harvest season in the late summer to early fall. 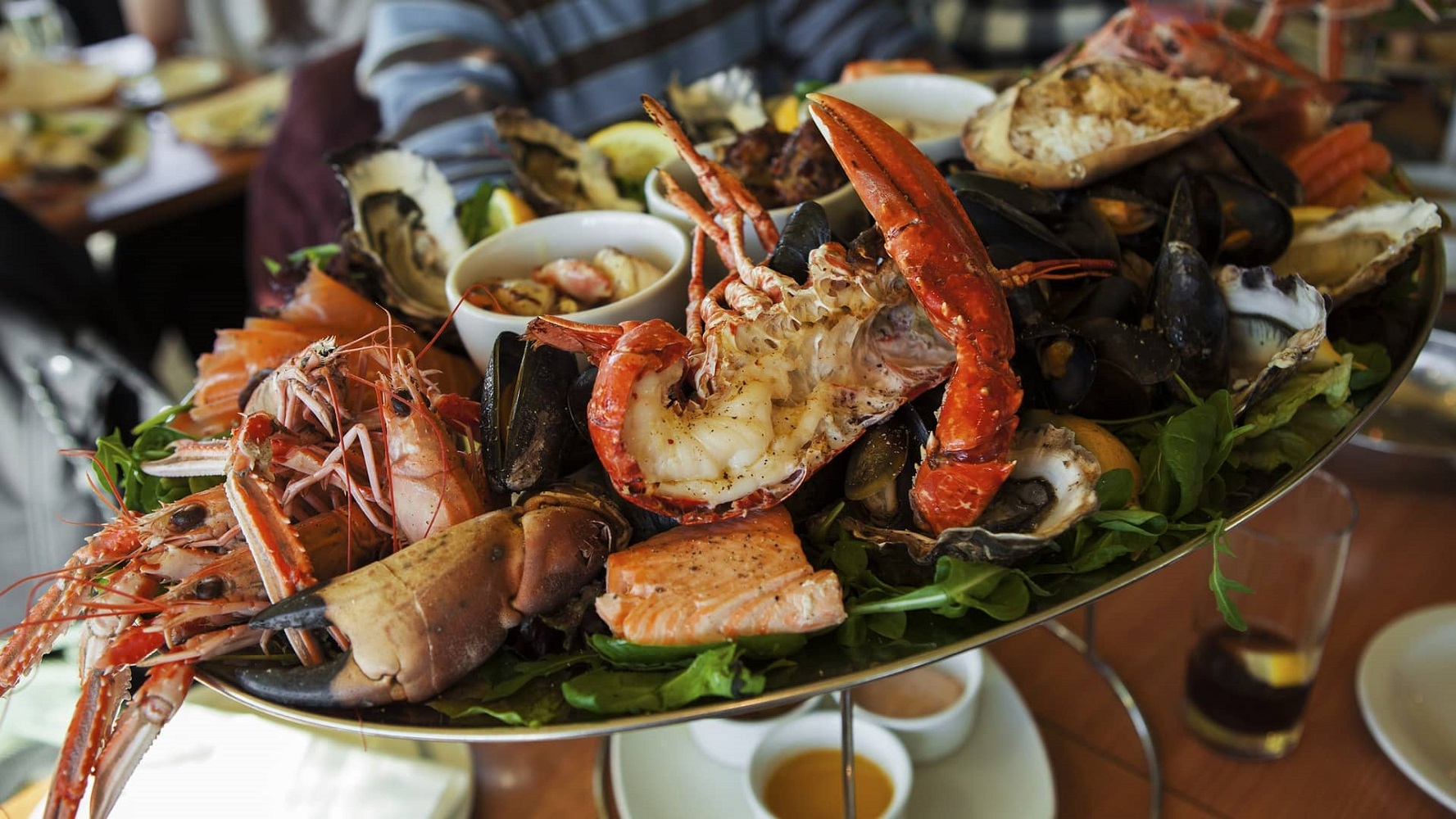 Jiggs dinner is said to be named from the main character of a comic strip called Bringing up father, which follows an Irish immigrant called Jiggs living in America. It’s typically served as a Sunday dinner special and made up of many different foods including corned beef, vegetables, potatoes, and split peas. You certainly won’t be hungry after eating this meal. And if you’re going to Newfoundland and Labrador, touton is also a must-try. It’s a doughy, fried bread that’s sort of like a pancake or doughnut. It can be served with butter, maple syrup or, weirdly enough, baked beans.

Have you ever heard of Nanaimo bars? Invented in 1986 by the mayor of Nanaimo, B.C., the chocolatey, custard-filled squares are a sugary dessert you won’t want to miss out on. Looking for something more savoury? The west coast is also known for its seafood, and there’s plenty of options. From wild pacific salmon to Dungeness crab, there’s a little something for everyone.

About 80 percent of Yukon is wilderness, making it home to all kinds of animals. This has made hunting and fishing very common in the territory, and you won’t have to look far to try game meat like moose or fresh fish like Alaskan salmon. Yukon is also known for its sourdough bread and is so popular that there is a festival in its honour, called The Yukon Sourdough Rendezvous. 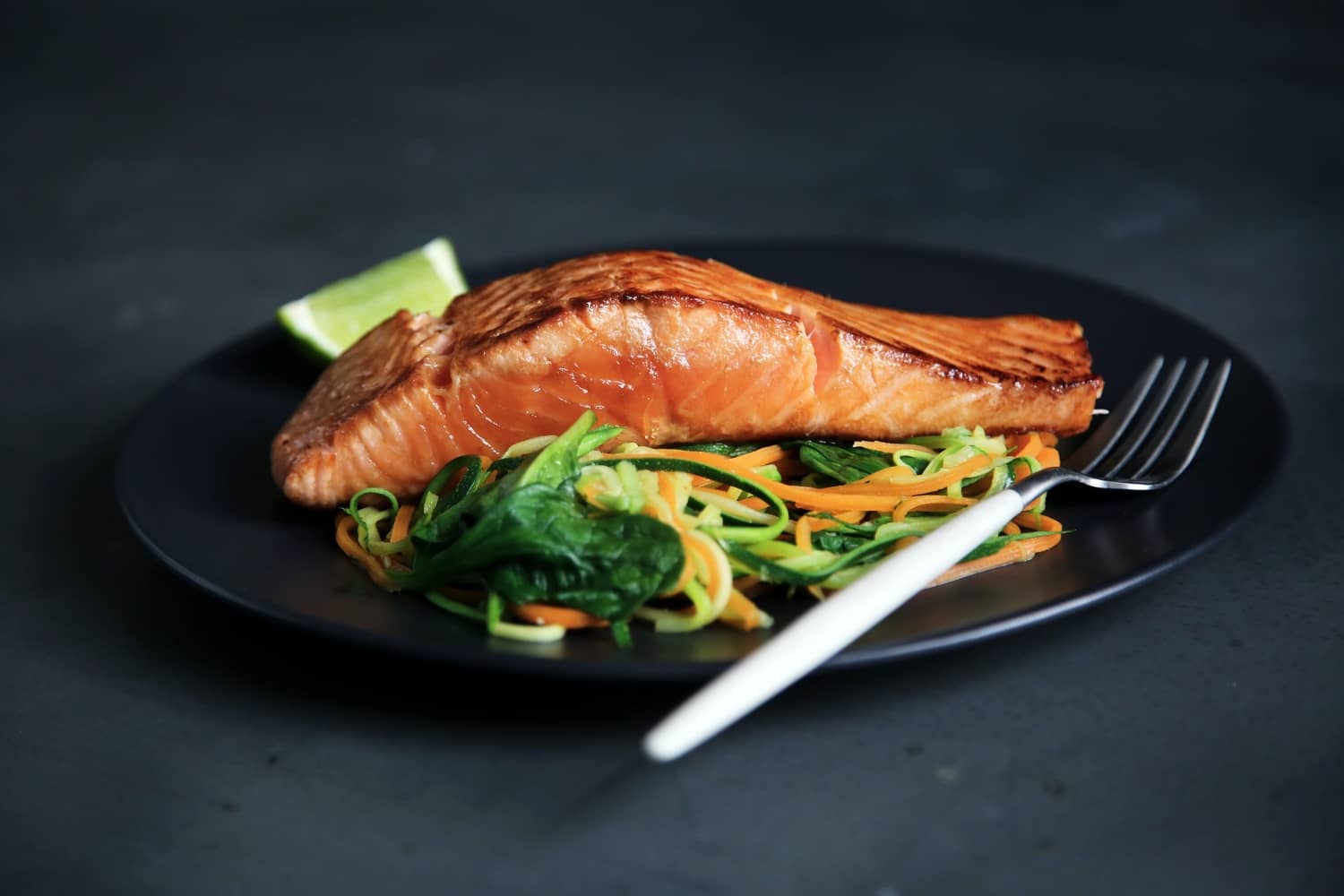 Arctic char can be found off the coast of the Northwest Territories, where it lives in freezing ocean temperatures. If you’re getting tired of hearing about fish, this territory is also known for birch syrup. Birch syrup is like maple syrup, and can be used on pancakes, waffles, or in desserts. But the difference is that birch syrup is bolder, stronger, and less sweet, making it great for cooking.

Caribou is “country food,” which means it’s food from the land, and is very common in Nunavut cooking. Caribou stew is a speciality in this territory where the game meat is mixed with potatoes and vegetables to make the ultimate comfort food during the cold winters.